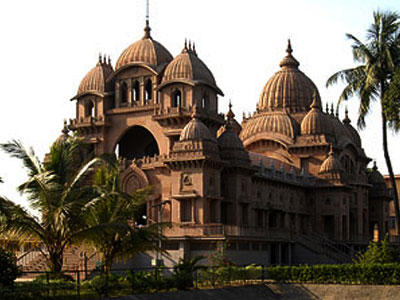 “With the Holy Mother as the centre of inspiration, a Math is to be established on the eastern bank of the Ganga. As ‘Brahmacharins’ and ‘Sadhus’ will be trained in this Math (Belur Math), so in the other Math also, ‘Brahmacharinis’ and ‘Sadhvis’ will be trained.” was the long cherished dream of Swami Vivekananda.
Due to the prevailing social conditions at that time, his dream was realized much later during the birth centenary of Holy Mother Sri Sarada Devi, when on 2nd December, 1954 the women’s Math was established at Dakshineswar, Kolkata by the authorities of the Ramakrishna Math & Ramakrishna Mission. Sri Sarada Math was granted independent status in September 1959 and in May 1960, the Trustees of Sri Sarada Math founded the Ramakrishna Sarada Mission with the object of serving women and children in all possible ways, irrespective of caste, creed and nationality. Founded on the twin ideals of ‘Atmano Mokshartham Jagaddhitaya cha’- ‘liberation of the Self and service to all’, Sri Sarada Math and the Ramakrishna Sarada Mission run at present (November, 2011) 30 centres in all; 28 in India and 2 centres abroad, in Australia and in Sri Lanka.

Rasik Bhita is situated at that holy site, where once stood the house of Rasik, the legendary sweeper of Dakshineshwar Kali Temple, and was sanctified by the visits of Sri Ramakrishna. The place was donated by trustees of the Ramakrishna Vanaprastha Ashrama to Sri Sarada Math. Sri Jugal Maity, Secretary of that trust body took special initiative towards this donation.

This unique background made it just the place where Sri Sarada Math could fulfil the sacred mission of ‘Shiva Jnane Jiva Seva’ serving God in Man, irrespective of caste, creed and nationality by adding another important chapter to the Math’s comprehensive agenda of women upliftment.

The foundation stone was laid by Most Rev. Shraddhaprana Mataji, 3rd President, Sri Sarada Math and Ramakrishna Sarada Mission on 23rd November, 1999. The dedication ceremony of the four-level memorial building, constructed on this sacred land, took place on November 24, 2001. The inauguration of the institution was on 23rd December, 2001 while classes commenced from January 16, 2002.

With the passing years, due to the increasing number of students, an extension of Rasik Bhita was of dire need. On 23rd May 2012, Most Revered Pravrajika Bhaktiprana Mataji, 4th President, Sri Sarada Math & Ramakrishna Sarada Mission inaugurated Sarada Bhita – the new extension of Rasik Bhita at the premises 4/2, T.N.Biswas Road, Kolkata-35, which is very near to Rasik Bhita. Since then regular classes are being held in this 3-storeyed building.

On 3rd September 2018, Vivekananda Bhawan was added as another new extension of Rasik Bhita at the premises 7A, Jadunath Sarbabhauma Lane, Kolkata-35, near to Hiralal Majumdar Memorial College for women.