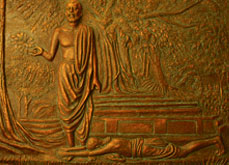 The place where Rasik Bhita is situated was sanctified by the visit of Sri Ramakrishna. Who is this Rasik? Rasik was a sweeper in the temple garden of Dakshineswar. He was almost unknown, as his low status barred him from entering the temple; he could not even touch the priests because of social restrictions existing at that time. 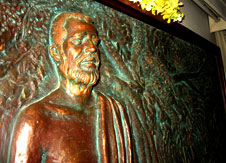 Swami Vishuddhananda recalled: I heard from Ramlal Chattopadhyay (Sri Ramakrishna’s nephew) about the Master’s unconditional grace bestowed on ‘Rasik. He was the sweeper of the Dakshineswar temple garden. Every day he saw the Master from a distance and observed that many people visited him .Rasik pondered, “I am so near to the Master; still I cannot go to his room and touch his feet. What kind of sin have I committed? The Master is saving so many souls, good and bad. How unfortunate I am! I see him from a distance but cannot go near him.” Thus a storm was raging in his mind over a period of few years. He had no peace.

One day a golden opportunity came. The Master went to the pine grove to answer the call of nature and brother Ramlal was waiting near the Panchavati. Rasik hid himself behind a tree and thought, “I don’t care what will happen; I can’t bear it anymore.” When the Master was returning, Rasik prostrated himself on the path near the Nahabat (the music tower of the temple), grabbed his feet, and cried out: “Father, what will happen to me?”

This unexpected approach startled the Master, and he went into Samadhi (deep spiritual ecstasy ), which lasted for sometime. Rasik washed the Master’s feet with his tears, so intense was the agony of his heart. Gradually the Master returned to the normal state, touched Rasik’s head and said, “You have achieved everything.” 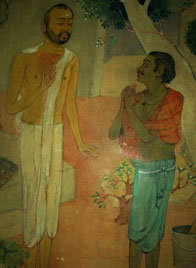 While in meditation, Sri Ramakrishna’s mind once ran to Rasik’s house. This may surprise the reader, but it actually happened, The Master describes this incident in his own words: “The Chitashakti, Mahamaya has become the twenty-four cosmic principles. One day as I was meditating, my mind wandered away to Rasik’s house. He was a janitor. I said to my mind, “Stay there; you rogue!” The divine Mother revealed to me that the men and women in that house were mere masks; inside them was the same Divine power, Kundalini (the dormant spiritual power in every human being), that rises up through the six spiritual centers of the body. It is the feeling of oneness of all living being that lies behind this unique incident of Sri Ramakrishna’s divine grace.

In the memoirs of Kedarnath Bandyopadhyay of Dakshineswar, we read: “Rasik Hadi of Dakshineswar Village belonged to the sweeper caste. I saw the Master talk to Rasik standing in his courtyard, as if they were friends. Seeing Rasik a little tipsy, the Master said with a smile: “I understand your condition. Don’t drink too much.” Rasik fell at the Master’s feet and said: ‘Father, I cannot afford to drink. Who will give me money to buy alcohol? Luckily, Natabar Panja’s mother died, so I got some extra money for doing some cleaning in that home. But whose mothers are going to die every day, Father?”

In his famous lecture “My Master” in America, Swami Vivekananda said, “My Master once sought permission to clean a sweeper’s house . The sweeper of course refused. So late at night when all were asleep, Thakur used to go to his house. He had long hair, and with his hair he would wipe the place and said, “allow me to feel that I am lower than the sweeper” so that the pride of belonging to a higher caste is completely removed. In doing so not only did he erase his own pride but also established in the modern sceptic minds that such eradication is truly possible. 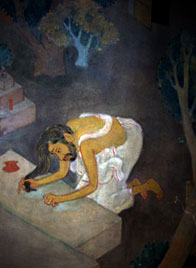 The passing away of Rasik in his house near the tulsi grove was a memorable incident of which there are several accounts, each one a little different from the other. But the main theme is almost the same. Here we record what Kumudbandhu Sen had heard from Ramlal:

Uncle (Sri Ramakrishna) was resting one afternoon in his room. He got up and then came out to the verandah. Pointing to Rasik, the temple sweeper, he said to me, “Rasik is not an ordinary mortal but a denizen of heaven in human form.” Another day the Master went to the pine grove while I went behind him carrying the water spout and towel for his use. Rasik was sweeping around the Panchavati grove in the temple garden. When uncle was returning to his room, Rasik prostrated at his feet. Smiling, the Master inquired about his welfare. Rasik got up and said that he could not get over the misfortune of his lowly birth, which condemned him to the despicable life of a sweeper. Uncle replied that he should not bemoan his social status, for he was after all born a human being, the highest of God’s creation. The supreme spirit dwelt in him also.

The Master reminded him of his good fortune to have been entrusted with the sacred task of sweeping the temple courtyard and temple steps, sanctified by the dust of the feet of thousands of devotees who came to worship at the shrines. With tearful eyes Rasik asked, “Father, shall I be saved?”

With a gracious smile the Master asked him to raise a tulsi grove in a corner of his courtyard and chant the Lord’s name there. 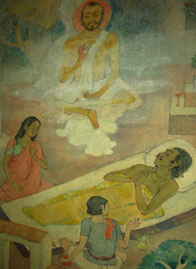 Two years after the demise of the Master, Ramlal met Rasik’s wife near the Panchavati. She was weeping inconsolably. Ramlal asked her, “What has happened? How is Rasik?” She replied that her husband was very ill. Her sons had called in a Doctor, but he refused to take any medicines. He insisted on being given charanamrita (sanctified water). As Rasik was a devout Vaishnava, Ramlal immediately went to the Radhakanta temple, collected some sanctified water and some tulsi leaves, and gave them to Rasik’s wife. Since Ramlal did not see her again, he went to their hut a few days later. Rasik’s wife and sons cried and said that he had passed away.

They narrated the last days of Rasik: The sanctified water of the Radhakanta temple seemed to have a stimulating effect on Rasik. He felt better. His fever abated and he spent his waking hours in chanting the Lord’s name and in fervent prayer. One day when they returned home after their work at about midday, he insisted on their taking meal at once. After they had complied to his wish, he asked them to take him out to the tulsi grove. It was hot outside. They reluctantly obeyed him. He lay on a mat with his rosary in his hand and asked them to chant God’s name. After half an hour his face brightened up. There was an ardent look in his eyes and a smile on his lips. He exclaimed: “Oh, Thou hast come at long last! How unsurpassingly beautiful, glorious resplendent!” He then closed his eyes and it seemed to them that a halo played around his radiant peaceful face as he fell into eternal sleep.

Rasik was not a prominent figure in Sri Ramakrishna’s divine drama. Although the audience did not see him on the stage, he had the responsibility of keeping the stage, the temple garden of Dakshineswar clean. He demonstrated in his life that work is worship and each is great in his own place.